There are several ways to gauge whether a marriage is on solid ground. One is to do a long car trip together and see how it goes. My husband and I put our 35-year marriage to the test in May, except we added an extra challenge. We drove 3,800 km in total on our holidays – in his Smart Car!

When Rich asked me a few months ago whether I’d like to attend a microcar conference festival in Madison, Georgia with him in May, he was shocked when I said yes. He had already taken several long trips with the Smart – even as far as Arkansas – and I was always too busy to go. I’d ridden in the Smart many times, but never for long distances. I figured with months to plan, I could take a few days away from my freelance writing businesses. Plus, we were able to combine the car event with visits to family along the way.

At the time of my promise, I didn’t think of little things like packing for two people for nine days in a Smart Car. The hatchback “trunk“ is more sizable than most people think, but it takes some creativity to cram in enough “stuff“ for a substantial trip into one medium suitcase each. I knew I was in trouble when I started eliminating jewelry because it would take up too much space in my bag.

We managed to fit in our suitcases, plus a camera bag, laptop computer, cloth bag full of maps and books, and my handbag. Oh, and the two of us. That car was FULL. And so we started off.

As soon as we crossed the U.S. border, people started doing double-takes as they passed us on the highway in their big vehicles. I couldn’t believe how many passengers pulled out cell phones and took our photo as we were traveling at 65 miles per hour. I’d love to tell you it’s because I’m devastatingly beautiful – but I’m pretty sure it’s because Americans are still in awe of the Smart Car. As yet, it’s not available in the States, but a gas version will be introduced in the U.S. next year. Dozens of people came up to us during our trip to say they’d put down their $99 to reserve a Smart.

For the past two-and-a-half-years, I’ve been hearing from Rich how he never made good time on trips because he had to answer so many questions about the vehicle at every rest stop, restaurant and hotel. Well, in May, I was witness to it.

Here are the answers we repeated at least 200 times. You figure out the questions.

The highlight of the trip was “Micros in Madison 2007“ featuring the national meet of the Vintage Motorcar Club. The event was organized by Bruce Weiner, who used to own Dubble Bubble here in Canada, and was held at the grounds of his Microcar Museum – Double Bubble Acres. Bruce was a remarkably generous host, and people showed up with their microcars from all over North America. Imagine acres of tiny, brightly coloured cars and scooters that people have restored, rejuvenated and polished to within an inch of their vehicle lives. We joined six other Smart Cars, which were welcomed with enthusiasm – even though our vehicles were limousine sized compared to the other micros!

One of the most exciting parts of the weekend was when the awards were announced – and a Canadian vehicle won 1st Place Motorcar. The 1934 Raleigh Safety Seven is owned by Thornhill resident Peter Svilans, who attended the show with his wife Liz and their son Patrick. The entire family had a hand in restoring the car, although Peter admits that, “Liz has rescued me more times than she’s worked on the car. She tows me when it breaks down!“

Peter used to restore vehicles for Bruce Weiner when the microcar collector was based in Concord with Dubble Bubble. In fact, Peter and Patrick have restored more than 50 of the cars on display in the Madison museum. As for winning 1st Place at the conference, Peter says he was surprised. “The Raleigh isn’t the prettiest of vehicles. I thought it was a face only a mother could love.“

You can’t really say Peter and Liz tested their marriage the way Rich and I did; they drove down with Patrick in a large vehicle and trailered the Raleigh. I bet Liz got to bring all the jewelry she wanted.

Was our trip a success? Well, Rich and I had a lot of fun and we’re still married – but we just bought a Jeep Patriot for future road trips. Why tempt fate?

Dorothea Helms connects people and ideas, and can be reached at writer@wsws.ca 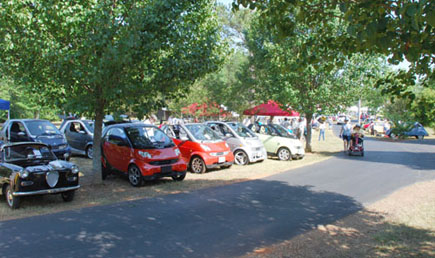 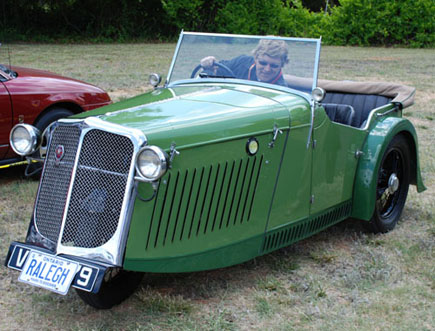 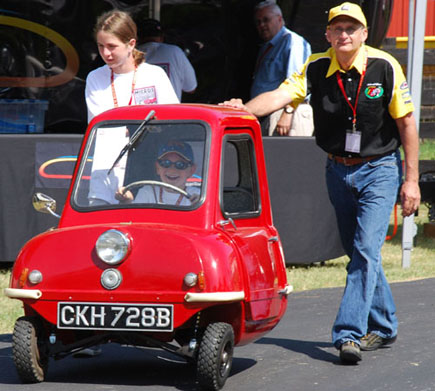 This 1965 Peel P50 is the smallest production microcar ever produced