Running with the big dogs

I love to drive small cars, and my newspaper articles usually focus on compact and sub-compact vehicles. For this piece, I decided to drive something totally out of character. How about a Hummer? Nah – too small. I drive the smallest car in Canada – a smart car – so I figured it would be interesting to try driving the largest – a highway tractor-trailer. With the help of the Ontario Trucking Association, Challenger Motor Freight of Cambridge offered to host me for a day. 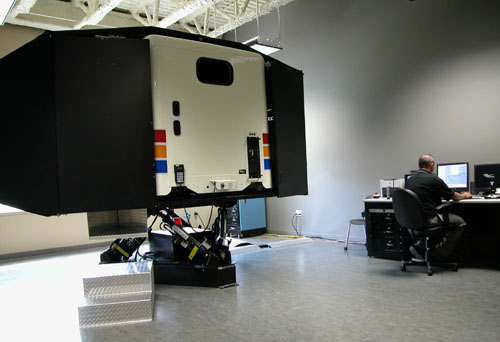 Now, I had never even sat in an 18-wheeler, much less driven one. Step one was to try “driving” in Challenger’s half-million-dollar FAAC truck simulator. This sim is an actual Freightliner cab with five projection screens all around the “driver.” The dash is detailed, down to the air brake releases.

I was using the sim as a beginner, but its main use is for experienced drivers. Situations such as bad weather or the actions of dangerous four-wheelers (what truck drivers called car drivers) can be simulated so that drivers can learn what to do when unexpected scenarios arise. The sim is also useful to help drivers who have been in accidents; to simulate the situation and teach the driver what to do should the same circumstances reoccur. The operator can inject other situations, such as having the vehicle ahead brake suddenly if the truck driver is following too closely.

One thing that surprised me in driving the sim was the “hurl” effect. As the simulator is on six hydralic rams, the cab moves to imitate bumps in the road and the steering wheel twitches when you go over a curb. Great mirroring of reality – but a side effect for many people is motion sickness. My sim instructor Dwanye Barnett warned me that older drivers are affected the most. Mike Watts, the driver I went out with later in the day, told me he had to take Gravol before going in the sim. I lasted about 30 minutes, then my arms got clammy and I felt nauseous. 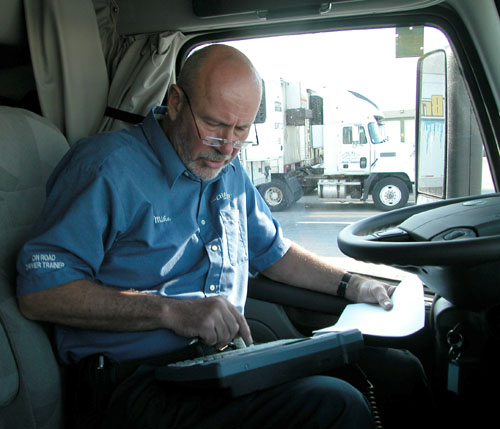 Once the theory portion of my day was complete, we progressed to step two – getting on the road. Mike Watts is both a driver and a trainer with Challenger. Two runs were planned, one in the country and one to Toronto. Watts had a new truck ready for me – a Volvo 670 sleeper with an Eaton AutoShift 10 speed transmission. It was so new, that the instruction manual was still attached to the passenger seat.

My first impressions had to do with the sheer size of the vehicle. Climbing up two long steps into the cabin, you truly do look down on traffic. The floor is over four feet above the ground. The cabin is over seven feet wide, with enough headroom to stand up and walk between the seats and back to the sleeper bunks.

Before driving, Mike completed a 30-minute pre-trip inspection to ensure the basics were in good order, from all the lights working, to no leaks and properly inflated tires. We’ve all seen occasional large chunks of shredded tire on the road. Truck drivers call them alligators. They are the result of running an under-inflated tire.

When Mike turned the ignition key, the console display lit up running diagnostics. Once he started the engine, more diagnostics appeared. The trucks have GSP tracking as well as a satellite terminal for communicating with the central dispatcher. The engine computer in this vehicle limits the top speed to 105 kph.

Then it was on to our first stop, delivering an empty trailer and picking up a full one. I was still queasy from the sim, and riding in a rig with an empty trailer didn’t help. The ride felt much more stable once we were pulling a loaded trailer.

Once we picked up the load, the plan was to drive it to Toronto, but it turns out I was in for an unexpected adventure. When the current dispatcher’s shift had ended, no one told the dispatcher who took over that I was along for the ride. Beep and the satellite terminal had a new request: pick up and deliver 22 tons of Corona beer – ALL RIGHT!

While the LCBO unloaded the trailer, Mike caught up on paperwork. Between the seats was an old pilot flight bag filled with logs and regulations. I was amazed at how many rules and regulations the driver has to understand. Mike also examined his fuel economy. A loaded tractor trailer averages about 33 L/100k (8.6 MPG) on the highway. With careful driving Mike often averages 28 L/100k (10.1 MPG). On a 2,000 kilometer trip that is a 100-litre savings. With the high cost of fuel, not something to ignore.

We completed another pickup, and then headed back to the Cambridge yard. All returning trucks are inspected upon their return. The entrance to the inspection building has the Michelin eTire sensor system. As we drove through, the tire pressure and temperature were measured automatically and logged in the tire history database. The wheel alignment was checked as Mike drove the rig over sensors. Checks were done and fluids were topped up, then we progressed to the highlight of my day.

Step three was my chance to drive! For training, the 53-acre Cambridge yard has a test road complete with painted lines. I made my way around a few times, then Mike hit me with surprise number one: “Let’s try parking.” After finding an empty area, I learned the Z pattern approach and backed the trailer into the empty space between the yellow lines that simulated a trailer on each side. Success! 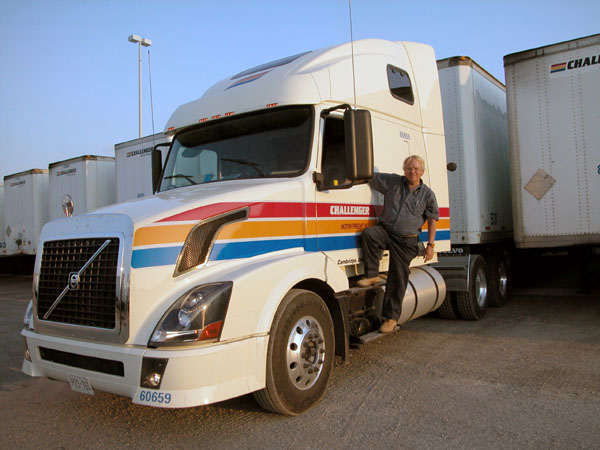 Surprise number two came quickly: “Now, park the trailer in spot E31.” As we were late in the day getting to the yard, the spot was in the middle of a row. No simulation this time, I thought. No theory, no yellow lines to hit – this is real. I had to park between two 53-foot trailers. I drove down to the end of the yard, did a U-turn, returned to E31, Z turned and backed up. Mike got out of the cab with his ‘ice cream whistle’ and said, “If I blow the whistle, stop – you are about to crash. If you hit, you owe me an ice cream.”

I followed his directions carefully and threaded the trailer into the space. Truth be told, I had about one foot more clearance on one side than the other. Worked for me!

At the end of the day, I decided that driving a tractor-trailer is like driving a building. The feeling of power is amazing but the acceleration is glacial. I was impressed with Challenger’s professionalism around everything I experienced. Juggling pre-checks, logs, reports and regulations, Mike’s job reminded me more of an airline pilot. Thanks, Challenger Motor Freight and Mike Watts. You opened my eyes to the life of a professional truck driver.

Here are photos not used in the article 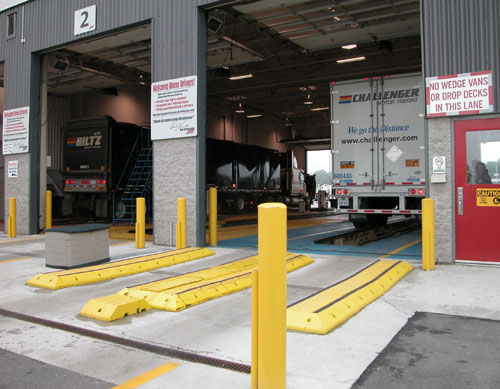 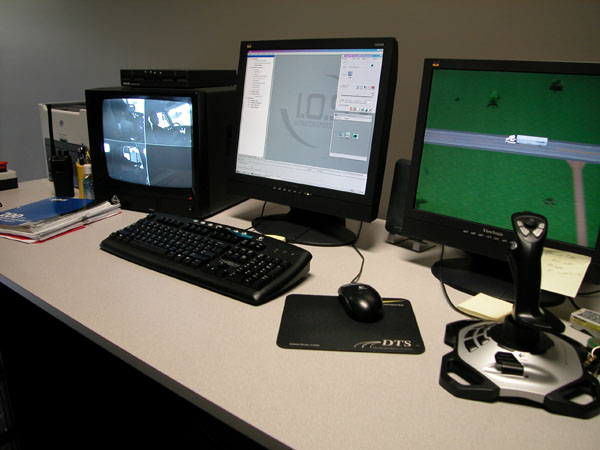 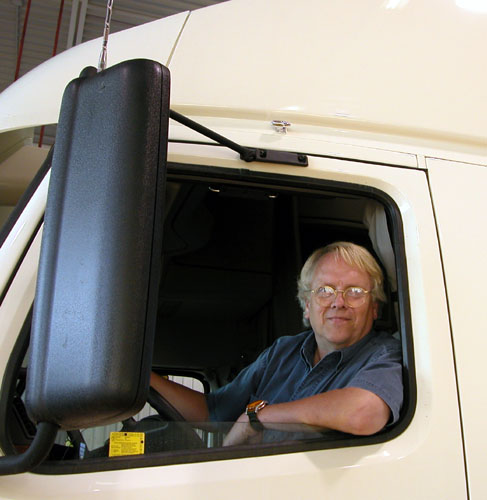 Rich Helms in the cab 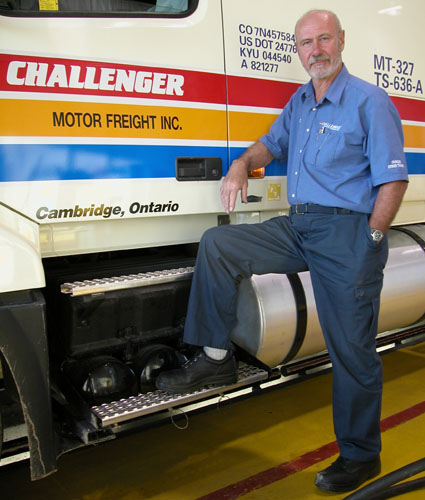