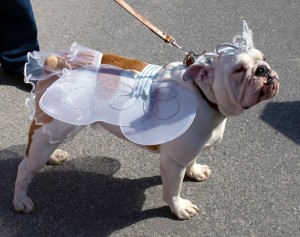 SUNDERLAND, ONTARIO, APRIL 5, 2009 – On Sunday, April 5, 2009, Margaret Helms, a one-year-old English Bulldog, won first place in the Large Dog Category in the Doggie Fashion Show held at the 14th Annual Sunderland Maple Syrup Festival. It was a sweet victory for the lovable 60-pound canine, who is a Sunderland resident and has many fans across North America. Competition was fierce in this fashion parade, which drew a number of breeds, from Chihuahuas to a Bernese Mountain Dog.

The paparazzi hounded Margaret, who is named for the late British actress Margaret Rutherford, and who looks remarkably like that film icon. In her acceptance speech, this canine “fairy” thanked her mom and dad, Dorothea and Richard Helms, for entering her into the Fashion Show, even though the tiara was a pain in the neck to wear. She also thanked Ruff Cuts, the Sunderland-based pet food and accessories store that sponsored the contest, as well as her breeder, Rose Brown, of Blackstock, Ontario. 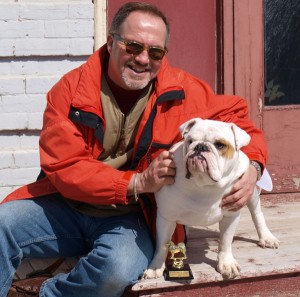 Margaret with her BFF Neil Crone

“We’re so proud,” said local freelance writer Dorothea, a.k.a. The Writing Fairy. “Margaret is the first dog that Rich and I have ever owned, and we think she’s beautiful. It’s great to know so many other people agree with us. She did a fine job today juggling the intricacies of her fairy outfit and the attention from the adoring crowds.” These included many human celebrities who attended the event such as Neil Crone, one of the wacky cast members from “Little Mosque on the Prairie.”

Margaret appears regularly on humorous greeting cards, which are in demand across North America. “I’m proud and privileged to display the Sunderland Maple Syrup Festival trophy on my mantel,” she says. “Do I get to eat my treats now?” 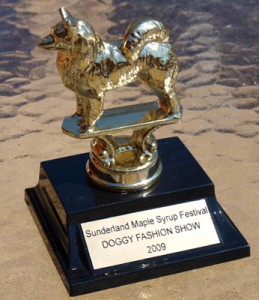